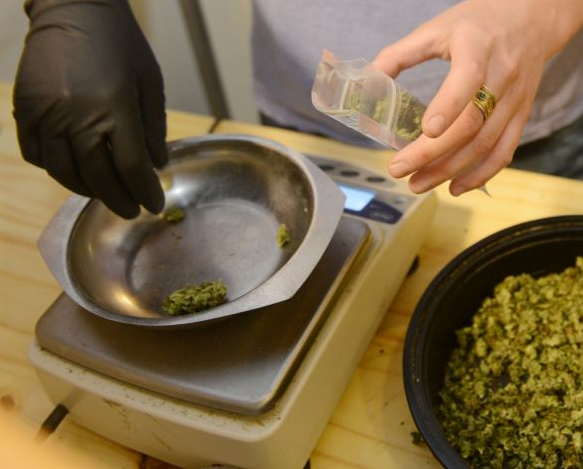 Amid debate, ALS and colitis added to medical marijuana program

HARTFORD — Controversy erupted among the state’s medical-marijuana gatekeepers Wednesday when members of the panel administering the program argued over the criteria to expand eligibility.

Dr. Deepak Cyril D’Souza, a Yale School of Medicine professor, charged that the Board of Physicians has not been properly vetting diseases and ailments for inclusion in the program.

But Consumer Protection Commissioner Jonathan Harris, who leads the advisory board, defended what has been called the most tightly regulated program of its kind in the nation.

Harris said the program is trying to overcome a stereotyped image of “the antiquated, perhaps in some ways Neanderthal attitudes of others about the use of this medicine.”

A back-and-forth disagreement between D’Souza on one side and Harris and the three other physicians on the panel occurred during an hourlong meeting Wednesday in which the board voted 3-1 to add amyotrophic lateral sclerosis and ulcerative colitis to the list of 14 eligible ailments.

A 2-2 vote put the issue of Fabry disease, a genetic disorder that causes severe muscular pain and rashes that also kills blood capillaries, more into the hands of Harris, who said he will decide on all three recommendations within the next couple of weeks.

A public hearing on the requests was held March 11, when D’Souza succeeded in delaying votes until this month. He told the panel Wednesday that an expert on ALS, also known as Lou Gehrig’s disease, should be consulted for additional information.

“I thought it would be a good idea for us to get input from those who might have the expertise,” said D’Souza, who usually appears at committee meetings via a video link and has emerged as the chief opponent to expansion of eligibility.

When reviewing diseases for inclusion in the program, the physicians answer three questions: whether the affliction is debilitating, whether marijuana is likely to be beneficial and whether there are “other matters” which are relevant.

On the issue of ulcerative colitis, an inflammatory bowel disease, D’Souza, director of schizophrenia research at the Veterans Administration Hospital in West Haven, said there wasn’t enough evidence to include it.

“I think it’s a bit premature for us to approve it right now,” he said. “There’s really no randomized, controlled trials, especially with marijuana or the whole plant.”

`The point is, we need more data’

Dr. Vincent R. Carlesi, a Stamford-based anesthesiologist with sub-specialty board certification in pain management, said the symptoms of ulcerative colitis are identical to Crohn’s disease, one of the original ailments eligible for participation in the state’s medical cannabis program.

“We weren’t the ones who approved Crohn’s disease,” D’Souza replied, pointing out that the General Assembly approved the law. “The point is, we need more data, more evidence to be able to state confidently that medical marijuana or whole plant marijuana would work to modify disease processes.”

Harris said that one of the many “exciting” effects of the medical marijuana program is the way patients are finding the varying levels of chemical compounds — called THC and CBD — in different strains of cannabis, and the benefits they are experiencing.

“What is unique to Connecticut are the pharmacists and the dispensaries really tightly assessing the various cannabinoids that being dispensed to the patients,” said Dr. Jonathan Kost, founder and medical director of the Hartford Hospital Pain Treatment Center. “In the case of ulcerative colitis, there are really significant data out there supporting the anti-inflammatory benefits. Our job is to kind of comb through all the data out there.”

“If we just go just based on hearsay, then I’m not sure that’s much of a process,” D’Souza responded.

“I think we all have our process of assessing the data out there,” Kost said. “There seem to be different thresholds of acceptance for the data.”

Harris took issue with D’Souza’s use of “hearsay.” He said the pharmacists who run the six dispensaries balance patient needs with the various chemical makeups of the drug, from pain relief to even reversing processes of diseases.

D’Souza responded that anecdotal evidence to expand the program, rather than hard science including double-blind placebo tests, does not fit his vision for what the Board of Physicians should be.

“I agree with you that scientific evidence and studies are very important,” Harris said. “The problem here is we’re stuck, kind of, in a place where there is evidence that medical marijuana provides relief. Thankfully, it’s not like some other things, the alternative being opioids, where there is addiction and death associated with the use of it. So it’s not like we’re sending people out to poison themselves.”

“There are going to be many people who want medical marijuana approved for everything,” he said.

At that point, Harris apologized if he offended D’Souza with the earlier reference to prehistoric mankind.

“I agree with you 100 percent that studies are important,” Harris said. “If you’re a Neanderthal, then I’m probably Java Man or something. I’m talking about the Neanderthal view that somehow we shouldn’t even consider this. For the last 100 years, this country has been calling this the ‘evil weed’ and not allowed what you are saying to happen. I hope the federal government will take the lid off.”

After the meeting, Tracey Gamer Fanning, of West Hartford, an advocate for the 3-year-old program, warned that the expansion is moving at such a slow pace that patients and potential patients are discouraged and underinformed.

Fanning, who was diagnosed with a brain tumor in 2006 and is the president of the Connecticut Brain Tumor Alliance, said Connecticut’s program is being tainted by reports from Colorado and California, where medical cannabis programs spun out of control.

“There are patients who can really be using this drug and having better quality of life, but because the education and information isn’t available to them, many don’t even know it’s been legal for two years,” Fanning said in an interview. “It’s not just Oxy anymore, it’s not just morphine that are available to patients to give them the best quality of life. Let’s focus on getting people healthy. The research is going to be huge and really important.”

Earlier this year, the board approved adding sickle cell disease, arthritic psoriasis and a type of failed back surgery to the list of eligible diseases. Those conditions are being drafted and reviewed for submitting to the legislative Regulation Review Committee. Harris said after Wednesday morning’s meeting that he hopes to expedite inclusion of the latest three ailments in time for review later this year by the committee.

There are 3,635 certified patients and 200 doctors signed up for the program.

On the list, the following conditions are fully approved in the state’s medical-marijuana program: