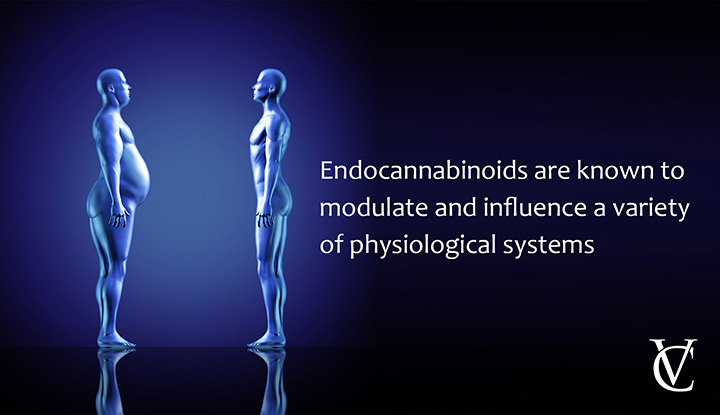 [headline]Clinical studies have clearly demonstrated that cannabinoid physiology impairment can have detrimental effects on not just your body composition.[/headline]

There is accumulating scientific evidence that the endocannabinoid system plays an important role in how the body regulates energy (calorie) balance, as well as carbohydrate and fat metabolism. As such, the endocannabinoid system (ECS) is an often overlooked key in the regulation of body weight and body composition (note: “body composition” here refers to the relative amounts of lean mass and body fat).

Scientists have uncovered that endo/phytocannabinoids act via central (brain) and peripheral (gut, liver, muscle and fat) mechanisms. Central control of appetite, satiety, cravings and food-seeking behavior involves a complex interplay between various centers of the brain.  Different areas of the brain receive information in the form of nutrients, hormones and signaling molecules from body fat tissue, the gut, blood and peripheral sensory receptors.  It is accepted that endocannabinoids, and certain naturally occurring phytocannabinoids in Cannabis activate cannabinoid receptors type 1 and type 2 (CB1 and CB2 receptors), in addition to various other G-protein coupled receptor families (e.g., TRPV1, GPR55 and others).

The CB1 receptor is believed to be responsible for most of the central effects of cannabinoids on hunger/satiety centers of the brain that affects appetite and energy intake. Moreover, CB1 receptors have also been discovered to exist in the peripheral tissues outside of the brain, including key organs such as adipose (fat), liver, gut, pancreas and skeletal muscle.  The interplay of these central and peripheral mechanisms, and their effects on body weight and body composition, is currently under intense scrutiny.

Interestingly, over-activation of the endocannabinoid system, primarily via CB1 activation has been suggested to contribute to increased abdominal obesity, glucose uptake into adipocytes (fat cells), and insulin resistance in muscle.  This “metabolic dysfunction” sets up a vicious cycle whereby further insulin resistance in muscle and liver increases abdominal obesity and further CB1 over-activation, resulting in greater food-seeking behavior and increased appetite. Animal studies have supported this hypothesis, by showing that stimulation of CB1 receptor with anandamide induces both increased food intake, and body weight gain.

Proof-of-concept of the potential effectiveness of CB1 receptor blockade in humans had been established with preclinical and clinical studies of rimonabant,1 the CB1 receptor reverse agonist (i.e. it induces an opposite response vs. CB1 activators). These studies have uncovered not only a reduction in food intake, but also improvements in body composition (e.g. preferential losses of body fat while retaining lean mass).  In addition, treatment with rimonabant was accompanied (by) improvements in cardiometabolic risk factors beyond what would have been expected with weight loss alone.

Another study published in 2012 by Farrimond et al. examining the effects of different phytocannabinoids, such as cannabinol and cannabidiol, on feeding patterns in rats supports the theory that different cannabinoids modulate CB-1 receptors and hence appetite and metabolism with opposing effects.  This study demonstrated that cannabinol (CBN) increased food intake and body weight gain, while cannabidiol (CBD) decreased food consumption and weight gain.  Cannabigerol (CBG) had a neutral effect on chow consumption and feeding behavior in this particular rat study.

1 Unfortunately, rimonabant has since been removed from clinical use due to independent studies suggesting adverse side effects.