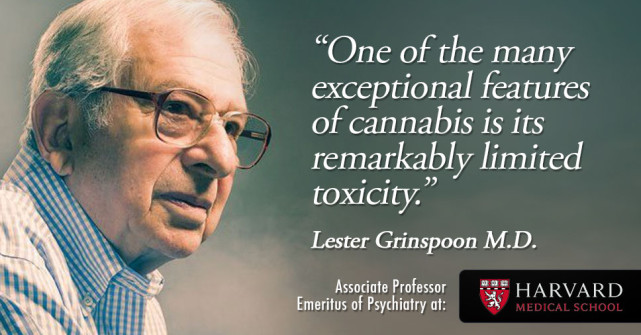 This article was originally published on Monday, September 15, 2003 for the Harvard Crimson Online, and has been re-posted from the November – December 2003 Cannabis Health Journal.

My improbable cannabis enlightenment began in 1967. I was concerned that so many young people were using the terribly dangerous drug, marijuana, so I decided to review the medical and scientific literature on the substance and write a reasonably objective and scientifically sound paper on its dangers. Young people were ignoring the warnings of the government, but perhaps some would seriously consider a well- documented review of the available data.

As I began to explore the literature, I discovered, to my astonishment, that I had to seriously question my own
understanding. What I thought I knew was based largely on myths, old and new. I realized how little my training in science and medicine had protected me against this misinformation. I had become not just a victim of a disinformation campaign, but because I am a physician, one of its agents as well.

To share my new new skepticism, I wrote a book, Marijuana Reconsidered, which was published in 1971 by Harvard University Press. While writing the book, I considered trying marijuana, not because I thought it would inform my work, but because it appeared to be an interesting recreational experience. I decided against it in order to avoid com- promising my objectivity.

After publication, I began to explore marijuana as a drug for relaxation and recreation, and I was not disappointed. In fact, it soon displaced alcohol altogether. I was 44 years old in 1972, when I experienced my first marijuana high. I have found cannabis so useful and so benign that I have used it ever since-as a recreational drug, as a medicine and as an enhancer of some capacities.

I am one of more than 12 million Americans who use it regularly. We smoke marijuana not because we are driven by “Reefer Madness” cravings, as some propaganda would have others believe, but because we have learned its value from experience. Yet almost all of the research, writing, political activity and legislation devoted to marijuana has been concerned only with the question of whether it is harmful and how much harm it does. The only exception is the growing interest in the exploration of cannabis as a medicine but as encouraging as that development is, it represents only one category of marijuana use. The others are sometimes grouped under the general heading of “recreational,” but that is hardly an adequate description of, say, marijuana’s capacity to heighten the appreciation of music and art or to strengthen the sense of connection to the natural world. It can deepen emotional and sexual intimacy, crystallize new ideas and insights, and expand one’s capacity to appreciate new aspects of life. Experienced users know that ideas flow more readily under its influence. Some of these ideas are good, some are bad; sorting them out is best done while straight. Now, whenever I have a difficult problem to solve or decision to make, I try to think about it both stoned and straight.

I often wonder whether, if I had begun to use cannabis earlier, I would have avoided making some choices I now regret. The worst career choice I ever made was to enter psychoanalytic training. Although I became skeptical about some aspects of psychoanalytic theory during that time, my qualms were not sufficient to dull the enthusiasm with which I began treating patients psychoanalytically in 1967.

It was not until the mid-’70s, shortly after I began to smoke marijuana, that my emerging doubts about the therapeutic effectiveness of psycho- analysis began to make me uncomfortable. The evenings when I smoke marijuana provide, among other things, an opportunity to review ideas, events and interactions of the day. This cannabis review-of-the-day is almost always self-critical, often harshly so, and its scope is broad. In 1980, the cumulative effect of these stoned self-critiques finally made me decide not to accept new psychoanalytic patients and then to resign from the Boston Psychoanalytic Institute.

I had been puzzled for many years over one aspect of another bad decision I made, this time as an adolescent. In later years it was not difficult for me to understand why I made the decision to leave high school early in my senior year to enter the Merchant Marine. What I could not understand was why my loving father (since deceased) so readily acquiesced to this plan; he never lifted a finger to try to prevent his promising high school student son from abandoning our shared dream of my going to college. One evening while stoned many years later it came to me,
and I now understand what had seemed so inexplicable about his behavior. Would I have eventually figured it out without the subtle alteration of consciousness that cannabis provides? Perhaps.

There is no denying that many people, especially young people, use marijuana mainly for “partying and hanging out”. And most non-users (at least until they learn of its medical value) believe that is all cannabis is useful for. This stereotype is so powerful that reactions ranging from puzzlement to outrage greet claims to the contrary. Anyone who attributes more than recreational and medicinal value to marijuana runs the risk of being derided as a vestigial hippie. So it is not surprising that many people who use cannabis do so behind drawn curtains.

If more people in the business, academic and professional worlds were known to be marijuana users, the government would not find it so easy to pursue its harmful and wasteful disinformation campaign. That campaign continues partly because of the widespread false belief that cannabis smokers are either irresponsible and socially marginal people or adolescents who “experiment” and “learn their lesson.” These lies are perpetuated when those who know better remain silent. The gay and lesbian out- of-the-closet movement has done much to reduce homophobia in this country. It may be difficult in the current climate where dissenters are intimidated and profiled, but if the many people of substance and accomplishment who use cannabis could find the courage to “come out” in the same way, they could contribute greatly to the diminution of “cannabinophobia” and help to end the harassment, persecution and prosecution of innocent marijuana users.

Dr. Lester Grinspoon MD is an Associate Professor Emeritus of Psychiatry at Harvard Medical School. He has been studying cannabis since 1967 and has published two books on the subject: “Marihuana Reconsidered” (Harvard University Press, 1971) and “Marihuana, the Forbidden Medicine”, co- authored with James B. Bakalar (Yale University Press, 1993). He maintains two active websites: The Medical Marijuana website (www.Rxmarijuana.com) and The Uses of Marijuana website ( www.marijuana-uses.com).

What ailments does medical marijuana help?

Dr. Lester Grinspoon, a psychiatrist, is a retired professor at the Harvard Medical School and a well published author in the field of drugs and drug policy. He has authored more than 140 articles in scientific journals and twelve books, including Marijuana Reconsidered and Marijuana, The Forbidden Medicine.

Dr. Lester Grinspoon, a psychiatrist, is a retired professor at the Harvard Medical School and a well published author in the field of drugs and drug policy. He has authored more than 140 articles in scientific journals and twelve books, including Marijuana Reconsidered and Marijuana, The Forbidden Medicine.