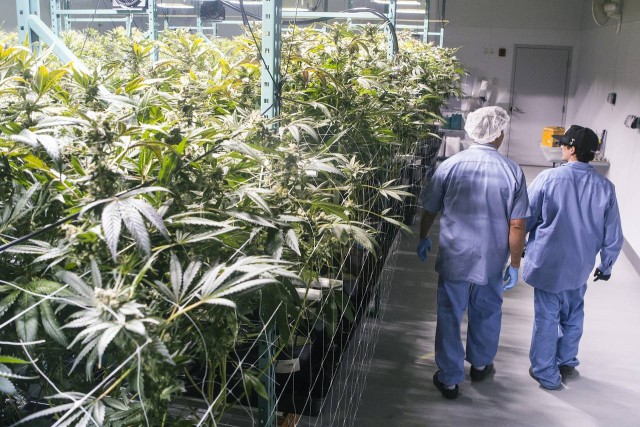 Inside a Medical-Marijuana Firm With a Sweet Tooth

Advanced Grow Labs is one of Connecticut’s four state-licensed pot producers; ‘this is medicine’

In an industrial kitchen with Momofuku Milk Bar and Bouchon Bakery cookbooks on the shelves, the company prepares marijuana-laced peanut-butter cookies, brownie bites and chocolate-hazelnut French macarons. The company plans on adding honey as well as a hazelnut spread to its lineup.

While Mr. Colandro’s training at the Culinary Institute of America in Hyde Park, N.Y., and his restaurant experience helped him land the job, he said his passion is growing medical marijuana. One afternoon last week, under the orange tint of high-pressure sodium lights in one of the company’s late-stage grow rooms, he inspected the buds of a short, bushy Indica plant.

“These are really starting to swell,” said Mr. Colandro, pointing to the plant’s sticky flowers covered in white frost and orange hairs. “It’s close to harvest.”

Advanced Grow Labs is one of four state-licensed producers in Connecticut’s nascent medical-marijuana industry. The state legalized the production and distribution of medical marijuana in 2012, and now has 3,600 patients enrolled in the program. Patients with debilitating conditions, including cancer and multiple sclerosis, can qualify for prescriptions.

David Lipton, a co-founder at Advanced Grow Labs, said the state’s strict regulations, including its no-pesticide policy and the requirement that all products get extensive testing for potency, set it apart from medical-marijuana programs in other states.

Advanced Grow Labs began production in July and had its first harvest in December. The company occupies part of a 62,000-square-foot warehouse in an industrial section of West Haven, Conn., located just off Interstate 95.

Inside the late-stage grow area called the flower room, rows of marijuana plants are divided by strains of indica, sativa and hybrids. Each has varying levels of tetrahydrocannabinol, or THC, the active ingredient in marijuana, as well as cannabinoids, the other chemical compounds found in the plant.

“It smells good in here, doesn’t it?” said Mr. Lipton. “This is medicine.”

Aside from growing marijuana meant for smoking and baked goods, Advanced Grow Labs also produces marijuana oil, which can be used in vaporizers or food preparation, and strips designed to dissolve under a patient’s tongue. Mr. Lipton declined to say how much the company sells.

New York legalized medical marijuana in July and is currently reviewing applications for producers and sellers. New York’s law doesn’t allow patients to smoke marijuana but permits them to use oils extracted from the drug. Mr. Lipton said he plans to apply for a license to produce and distribute medical-marijuana oils in New York as well.

Advanced Grow Labs began production in July and had its first harvest in December. The company occupies part of a 62,000-square-foot warehouse in an industrial section of West Haven, Conn., located just off Interstate 95.

A pungent smell greets visitors as soon as they step inside its administrative offices. The aroma grows stronger when visitors enter the production area.

Production employees change into pocketless scrubs when they begin their day. To get to the production areas, they pass through an enclosed chamber where they are blasted with air for about 30 seconds to clean them of any outside contaminants that may disturb the plants.

The grow cycle begins in the so-called mother room. Here, plants get their start inside a temperature- and humidity-controlled tent.

Plant cuttings are added to tiny blocks of compressed spun rock, known as rockwool cubes, along with some hormone gel. That creates the beginnings of a new marijuana plant. As the plants develop, they are later placed in coconut-based soil with calcium magnesium and perlite, a volcanic material used in plant-growing mixes.

Next the plants move on to the “veg room,” where they receive 24 hours of fluorescent light. Once they reach about eight to 10 weeks in age, the plants move to the flower room, where they get alternating 12 hours of darkness and light until they are ready to be harvested.

The plants are then hung and dried for about a week. To test if they are ready, production workers bend the stems.

“It’s not ready yet if it bends,” said Chris Mayle, executive vice president of operations for the company, flexing a stem a few times to demonstrate. “If it breaks on the third, it’s just about right.”

Once the marijuana buds are dried, they are either packaged for smoking or further processed into oil.

Both the oils and marijuana buds get tested to measure their potency. This helps patients know when they consume a cookie with, for example, 20 milligrams of active THC, that the high will be the same every time they take that same dosage.

Inside the bakery, Mr. Lipton looked over a freshly baked batch of chocolate-chip cookies, the most popular item with patients.

“We keep coming up with fancy cookies, but they say we just want chocolate-chip cookies,” Mr. Lipton said.

“They just want homestyle chocolate-chip cookies that their mom made for them,” he said.