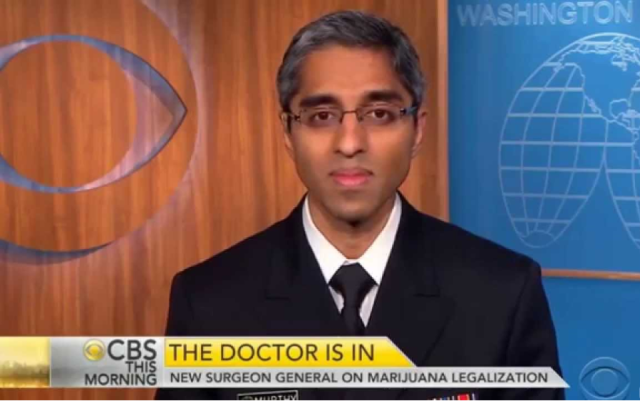 Dr. Vivek Murthy, the nation’s new surgeon general, says that marijuana “can be helpful” for some medical conditions, and wants science to dictate policy on the federally banned substance.

“We have some preliminary data that for certain medical conditions and symptoms, that marijuana can be helpful,” Murthy said during a Wednesday interview on “CBS This Morning” in response to a question about his stance on marijuana legalization.

While Murthy didn’t take the opportunity to endorse legalization of marijuana for medical or recreational purposes, he did add that he believes U.S. marijuana policy should be driven by science and what it reveals about the efficacy of using the plant for medical purposes.

“I think we’re going to get a lot more data about that,” Murthy said. “I’m very interested to see where that takes us.”

Murthy isn’t the first surgeon general to question U.S. drug policy. In 1993, Joycelyn Elders, the surgeon general under President Bill Clinton, said she believed that legalizing drugs in the U.S. would “markedly reduce our crime rate.” Then in 2010, Elders called for the legalization of marijuana.

Other high-profile doctors have also come out in support of medical marijuana. Sanjay Gupta, CNN’s chief medical correspondent and Obama’s first choice to be surgeon general when he first took office 2009, produced two documentaries for the cable channel exploring the benefits of medical marijuana. Just last year, Gupta told HuffPost that he thinks the federal government should legalize medical marijuana.

In January, the American Academy of Pediatrics called on the Drug Enforcement Administration to reclassify marijuana as a less-harmful substance in order to facilitate research for its potential medical use.

Under the Controlled Substances Act, the U.S. has five “schedules” for drugs and chemicals that can be used to make drugs. Schedule I is reserved for drugs that the DEA considers to have the highest potential for abuse and no “currently accepted medical use.” Marijuana has been classified as Schedule I for decades, along with other substances like heroin and LSD. While a lower schedule for marijuana would not make it legal, it could ease restrictions on researching the drug.

Despite the federal ban, 23 states have legalized marijuana for medical purposes with at least two more states expected to consider medical marijuana laws by 2016.

“Dr. Murthy’s comments add to a growing consensus in the medical community that marijuana can help people suffering from painful conditions,” Tom Angell, chairman of drug policy reform group Marijuana Majority, told The Huffington Post. “It’s crazy that federal law still considers marijuana a Schedule I drug, a category that’s supposed to be reserved for substances with no medical value. In light of these comments from his top medical adviser, the president should direct the attorney general to immediately begin the process of rescheduling marijuana.”

UPDATE: 9:47 p.m. — The Department of Health and Human Services issued a statement attributed to Murthy.

Marijuana policy — and all public health policies — should be driven by science. I believe that marijuana should be subjected to the same, rigorous clinical trials and scientific scrutiny that the Food and Drug Administration (FDA) applies to all new medications. The Federal Government has and continues to fund research on possible health benefits of marijuana and its components. While clinical trials for certain components of marijuana appear promising for some medical conditions, neither the FDA nor the Institute of Medicine have found smoked marijuana to meet the standards for safe and effective medicine for any condition to date.